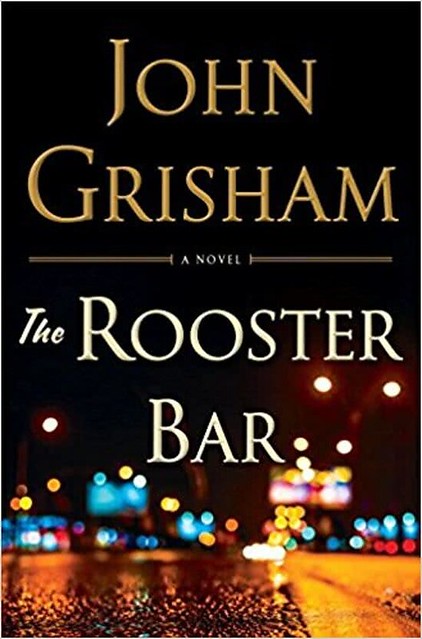 Mark, Todd, and Zola came to law school to change the world, to make it a better place. But now, as third-year students, these close friends realize they have been duped. They all borrowed heavily to attend a third-tier, for-profit law school so mediocre that its graduates rarely pass the bar exam, let alone get good jobs. And when they learn that their school is one of a chain owned by a shady New York hedge-fund operator who also happens to own a bank specializing in student loans, the three know they have been caught up in The Great Law School Scam.
But maybe there’s a way out. Maybe there’s a way to escape their crushing debt, expose the bank and the scam, and make a few bucks in the process. But to do so, they would first have to quit school. And leaving law school a few short months before graduation would be completely crazy, right? Well, yes and no . . .

John Grisham always writes great thrillers, mostly about law. ‘The rooster bar’ is a somewhat different story and not really a thriller. Three law students are heavily in debt and try to find different ways to make money. When they find out that the loans they have are with a guy who’s not really operating by law, they try to find a way out. But maybe the way out is not a legal way and they get in trouble.

To be completely honest, I didn’t think ‘The rooster bar’ is one of John Grisham’s best stories. At times I thought it was quite farfetched and unbelievable, although I did keep reading. I really wanted to find out what happened to the three students, but the ending wasn’t really satisfying either.

‘The rooster bar’ has an original story to it, that’s for sure. I think it’s bizarre if you find out you won’t be able to pass the bar exam, but also having loans that are so crazy high that you can’t really pay them off, is even more bizarre. If John Grisham has based this story of some truths, it’s almost too crazy for words. Even though the story may be farfetched, it did made me think in the end. John Grisham has done quite well in that part.

‘The rooster bar’ by John Grisham is not one of his best books. It feels farfetched, but it does make you think.