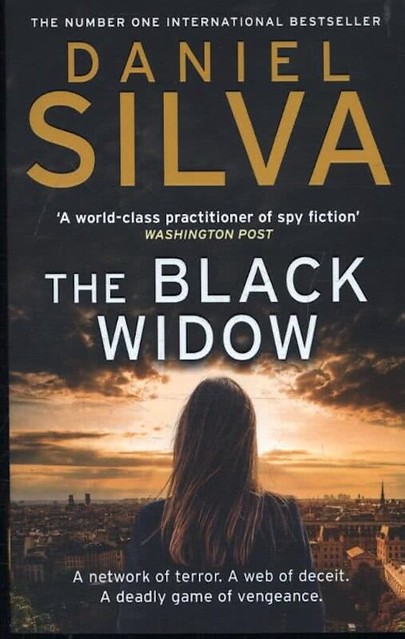 Legendary spy and art restorer Gabriel Allon is poised to become the chief of Israel’s secret intelligence service. But on the eve of his promotion, events conspire to lure him into the field for one final operation. ISIS has detonated a massive bomb in the Marais district of Paris, and a desperate French government wants Gabriel to eliminate the man responsible before he can strike again. They call him Saladin … He is a terrorist mastermind whose ambition is as grandiose as his nom de guerre, a man so elusive that even his nationality is not known. Shielded by sophisticated encryption software, his network communicates in total secrecy, leaving the West blind to his planning – and leaving Gabriel no choice but to insert an agent into the most dangerous terrorist group the world has…

When Daniel Silva started writing ‘The black widow’, the attacks on Paris and Brussels hadn’t happened yet. In Dutch, the book starts with a disclaimer, saying that everything in this book is fiction and some of it, sadly has become the truth. That makes ‘The black widow’ very realistic. In the beginning, the book is a tad slow. Daniel Silva starts the story with a lot of history and that took me a while to get through. But as soon as you’re into the story and Gabriel has recruted an agent the story becomes very gripping.

I got so sucked into the story that at times I put the book down expecting a bomb to go off any second. It’s nervewrecking and especially the ending is so insanely tense. I had to stay up late just to finish it, because I had to know Natalie (the agent) was OK in the end.

That this story has now partly become reality makes it very realistic and that makes it gripping. If you’ve read other books by Daniel Silva about Gabriel Allon, you’re immediately sucked into his world. But even if you haven’t, the story is easy to read. The characters are so strong and well put together and at some point Daniel Silve really makes you think. Natalie has a dillema which is almost too hard to imagine, but that was a huge part in the story and felt very realistic.

I think Daniel Silva is an amazing writer. The books previously released in Holland were a mix of good and not so good, but ‘The black widow’ has to be one of the best ones in the Gabriel Allon series. I really had to take a breath after I’d finished this one.

The fact that this story has sadly become partly reality makes ‘The black widow’ more realistic. The beginning may be slow, but the ending is so gripping and tense that you’ll get sucked right into the story. It also makes you think, which may be the reason why I think this is Daniel Silva’s best book in the series.