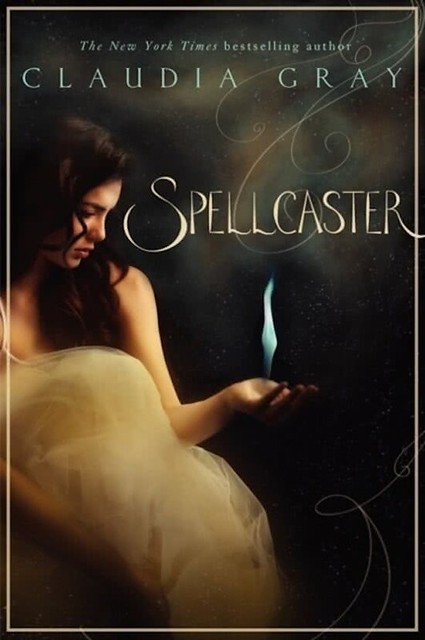 As soon as Nadia arrives in Captive’s Sound, she knows something is seriously wrong. The town is shrouded in dark magic, more powerful and complex than she has ever seen. Mateo has lived in Captive’s Sound his entire life, trying to dodge the local legend that his family is “cursed” with insanity. When the mysterious girl he has been dreaming of every night appears (Nadia), he fears the curse may be true. But danger is coming, and Nadia and Mateo must work together to stop this unknown force before it destroys everything in its path.

After reading the ‘Firebird’ series by Claudia Gray, my expectations of ‘Spellcaster’ were quite high. When I read the synopsis of this book, it reminded me a bit of Charmed and Twilight, so that could only be a positive thing for me. Unfortunately, that wasn’t the case. Claudia Gray has written a mostly standard story as a start of a new series (Spellcaster is the first book). There aren’t many surprises in the story and it wasn’t very original.

I thought Nadia was so stupid and naive at times, it felt almost childlike. Mateo was so easygoing, believed everyone and everything and the only character I kinda liked was Verlaine, who has two dads, which is the only original part in this book. I read a review on Goodreads where someone said that the characters felt flat and that was exactly what I thought. Maybe that’s because it’s the first book in a series, but that’s something I didn’t expect from Claudia Gray and it felt like a dissappointment.

At first I wanted to give the book only one start, but because Claudia Gray added Verlaine’s two fathers and Mateo being Mexican, she got an extra start. I wish more YA books featured these things and if Claudia Gray had gone more into depth about these characters, it maybe would’ve been a better story. I definitely won’t pick up the next books about Nadia.

The main characters were flat, the story wasn’t very original. Nope, ‘Spellcaster’ by Claudia Gray wasn’t a book for me. That’s too bad, but maybe my expectations were too high.