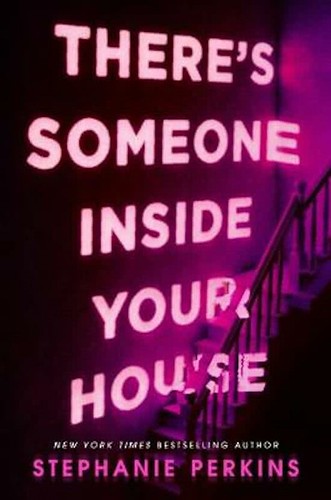 Over a year after her parents sent her away from Hawaii to live with her grandmother in landlocked Nebraska, Makani Young is still adjusting to her new life. She’s made a small group of close friends and even flirted with romance, but her past in Hawaii is still hard to forget. And then . . . one by one the students of her new high school begin to die in a series of gruesome murders. Makani doesn’t know who’s next on the list. Between this, and a secret scorching relationship with the school weirdo, this school year may turn out to be one to die for . . . literally.

I recently saw this book in a YouTube video and I thought the title was so intruiging that I immediately ordered it. I read a whole lot of thrillers in October (Halloween does that to me!) and I loved it. The idea that there’s someone inside your house is so creepy that I finished this book in a day.

You may know Stephanie Perkins from her YA books, so this is quite a change. But I think she did a pretty good job. Something’s happened in Makani’s past and that’s only being revealed quite at the end. That makes you curious throughout the story, because you wanna find out what Makani did that’s so bad.

But that’s not the only reason you wanna keep reading, because there’s quite some things happening in the story. There’s a killer on the loose and you don’t know who it is. Stephanie Perkins keeps you guessing until the end of the story and it’s quite scary what happens.

You don’t have to expect a horror story when you start reading ‘There’s someone in your house’ by Stephanie Perkins, because it’s still a YA story. But the story is tense and the book really is perfect for the dark winter months.