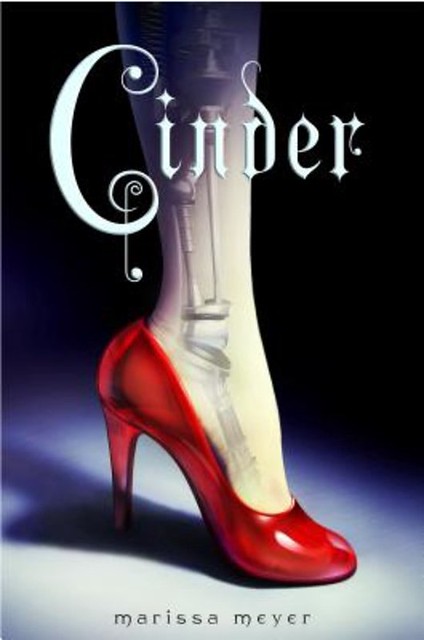 Humans and androids crowd the raucous streets of New Beijing. A deadly plague ravages the population. From space, a ruthless lunar people watch, waiting to make their move. No one knows that Earth’s fate hinges on one girl..

Cinder, a gifted mechanic, is a cyborg. She’s a second-class citizen with a mysterious past, reviled by her stepmother and blamed for her stepsister’s illness. But when her life becomes intertwined with the handsome Prince Kai’s, she suddenly finds herself at the center of an intergalactic struggle, and a forbidden attraction. Caught between duty and freedom, loyalty and betrayal, she must uncover secrets about her past in order to protect her world’s future.

I love fairytales. ‘Cinder’ by Marissa Meyer is a retelling of Cinderella, but then in a fantasy world. The basics of both stories are the same: both have an evil stepmom and stupid stepsisters. The fantasy element took some time for me to get used to, especially since I know Cinderella so well.

When I got used to that (which didn’t take very long), the story read so easily and quick that I finished it in no time. It sucked me completely in and I didn’t want to do much else but read the book. That’s exactly what I did: I finished it within’ a day.

But just because the story reads to well, that didn’t mean I thought the story was special. Nope, I saw everything coming from a mile away and it never surprised me. That was a bit of a shame, because I really expected something original. It doesn’t mean I didn’t enjoy it, but I just was a bit dissappointed.

‘Cinder’ by Marissa Meyer is a very succesful retelling of ‘Cinderella’. It reads easily but the story isn’t very original.