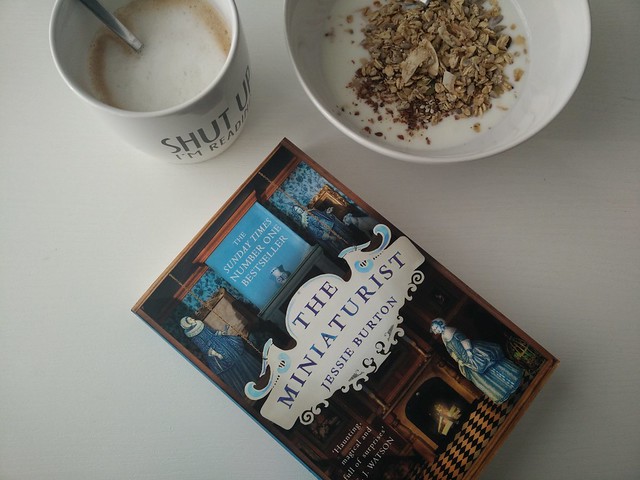 On a brisk autumn day in 1686, eighteen-year-old Nella Oortman arrives in Amsterdam to begin a new life as the wife of illustrious merchant trader Johannes Brandt. But her new home, while splendorous, is not welcoming. Johannes is kind yet distant, always locked in his study or at his warehouse office leaving Nella alone with his sister, the sharp-tongued and forbidding Marin.

But Nella’s world changes when Johannes presents her with an extraordinary wedding gift: a cabinet-sized replica of their home. To furnish her gift, Nella engages the services of a miniaturist an elusive and enigmatic artist whose tiny creations mirror their real-life counterparts in eerie and unexpected ways . . .

Johannes’ gift helps Nella to pierce the closed world of the Brandt household. But as she uncovers its unusual secrets, she begins to understandand fearthe escalating dangers that await them all. In this repressively pious society where gold is worshipped second only to God, to be different is a threat to the moral fabric of society, and not even a man as rich as Johannes is safe. Only one person seems to see the fate that awaits them. Is the miniaturist the key to their salvation . . . or the architect of their destruction?

I really had to go through a lot of trouble to get into the story of ‘The miniaturist’ by Jessie Burton. I read the book in English (obviously), but since I am Dutch, I had a lot of trouble with the story being set in Amsterdam, with Dutch names and terms. It felt wrong to me and that was why I even put it aside a couple of times.

But when I finally got into the story, it became touching, interesting and even a little magic. Despite that it really touched me at the ending, because it was so different than what I’d expected when I started it. It’s not really a book I would’ve picked up normally. The cover seduced me into buying it and I think that also gave me a wrong idea about the story.

What I first expected was magic or even fantasy and that’s not what this story is about. The storylines felt unfinished and I originally gave the book 4 stars, but when I started writing this review, I ended up changing it to 3. There is so much in the book that Jessie Burton could’ve done better, I missed a lot in this book that only the ending made up for that. The ending touched me, yes, but not enough to give the book 4 stars. That’s too bad because it really had a lot of potential, which Jessie Burton failed to use.

‘The miniaturist’ by Jessie Burton had a lot of potential but it just didn’t show in the story. The ending was touching but the story was so different from what I expected that it just wasn’t the book for me.