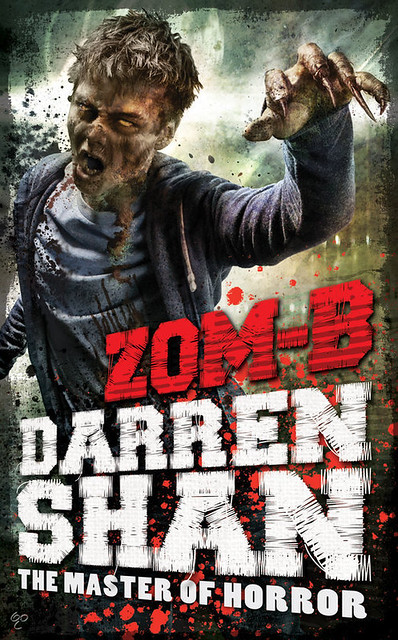 When news reports start appearing of a zombie outbreak in Ireland, B Smith’s racist father thinks it’s a joke– but even if it isn’t, he figures, it’s ok to lose a few Irish. B doesn’t fully buy into Dad’s racism, but figures it’s easier to go along with it than to risk the fights and abuse that will surely follow sticking up for Muslims, blacks, or immigrants. But when zombies attack B’s school, B is forced on a mad dash through the serpentine corridors, making allegiances with anyone with enough guts to fight off their pursuers.

I’ve been a huge fan of Darren Shan for years, he is one of my ultime favorite authors. The Zom-B series is a series I haven’t started and when I saw the first book, called ‘Zom-B’, on sale at the Book Depository, I just had to get it.

Since I love everything zombie, this serie should be the perfect serie for me. The beginning of the book was amazing, filled with excitement, gore and zombies. But then it got less exciting, almost boring I would say.

The ending was truly amazing, but seriously, the middle part was so dissappointing. What I did think was amazing, was the main character. I’ll try not to spoil anything, but for me something about the main character was such a surprise. Combining that with the amazing ending and the book still gets a 4-star rating from me.

Because the ending was open and so amazing, I’m still on the fence of reading the other books. The beginning and ending of ‘Zom-B’ was so amazing, but the middle bit just didn’t convince me enough. I’ll add the books to my wishlist but they won’t be a huge priority.

Zombies and Darren Shan, that should be a great combination. But sadly the middle part of ‘Zom-B’, the first book in the series, was dissappointing, despite an amazing beginning. The ending makes up for a lot but if I’ll finish the series, I don’t know.