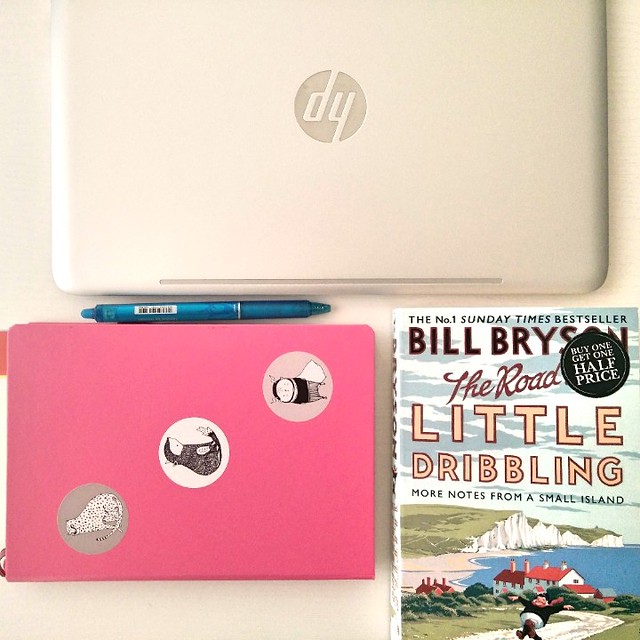 In 1995 Bill Bryson got into his car and took a weeks-long farewell motoring trip about England before moving his family back to the United States. The book about that trip,Notes from a Small Island, is uproarious and endlessly endearing, one of the most acute and affectionate portrayals of England in all its glorious eccentricity ever written. Two decades later, he set out again to rediscover that country, and the result is The Road to Little Dribbling. Nothing is funnier than Bill Bryson on the road, prepare for the total joy and multiple episodes of unseemly laughter.

When I first started ‘The road to little dribbling’, I was quite certain I’d give this book five stars. It started out funny, hilarious even, and was written very animated. Bill Bryson knows how to write to entertain people and he’s got a large amount of self-mockery. I can tell you that I cannot look at a gate from a parking lot without bursting out laughing. Want to know why? You definitely have to read at least the first few pages of this book.

As I said, Bill Bryson has an animated way of writing, but he’s also very descriptive. The way he writes you can totally imagine the places he talks about. Despite that and the more I read in ‘The road to little dribbling’, I wasn’t convinced this book should receive five stars. Sometimes Bill Bryson gets stuck in the past and may even seem whiney about the now. He doesn’t do that a lot, but often enough for me to get annoyed.

And that’s a shame, because despite the comparison between now and how it used to be, I thoroughly enjoyed this book by Bill Bryson. It was funny and entertaining. And I really wanted to do a roadtrip through the UK (something I’ve wanted to do for a very long time!), so he gets that across very well.

Despite the self-mockery and a whole lot of humor, ‘The road to little dribbling’ was a tad dissappointing. Bill Bryson sometimes gets stuck in the past and can get a littley whiney. But despite that I did enjoy the rest of the book.