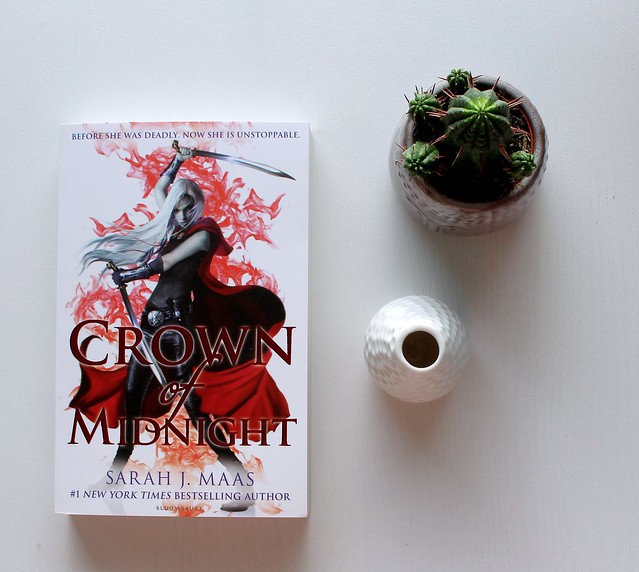 Eighteen-year-old Celaena Sardothien is bold, daring and beautiful – the perfect seductress and the greatest assassin her world has ever known. But though she won the King’s contest and became his champion, Celaena has been granted neither her liberty nor the freedom to follow her heart. The slavery of the suffocating salt mines of Endovier that scarred her past is nothing compared to a life bound to her darkest enemy, a king whose rule is so dark and evil it is near impossible to defy. Celaena faces a choice that is tearing her heart to pieces: kill in cold blood for a man she hates, or risk sentencing those she loves to death. Celaena must decide what she will fight for: survival, love or the future of a kingdom. Because an assassin cannot have it all.. And trying to may just destroy her.

‘Crown of midnight’ is the second part in the Throne of Glass series by Sarah J. Maas. I absolutely loved the first book and I was anxious to read more in this series. That took me a while because of my book buying ban, but when I was in Amsterdam recently, I picked ‘Crown of Midnight’ up in Waterstones.

I have to say that I was a bit dissappointed when I first started. ‘Crown of midnight’ starts off pretty slow and for me, that could’ve been a lot more fastpaces. I had moments where I struggled to get through the book, despite the fact that I love Sarah J. Maas’ style of writing. I struggled until about halfway through when something happens that sets off a whole rollercoaster of emotions.

Sarah J. Maas knows the world in which Celeana lives sooo damn well, and she perfectly knows what she does and doesn’t need to tell Celeana’s story. That’s what I admire from her and that obviously shows in the story.

And then the ending: BAM. Sarah J. Maas casually reveals something huge about Celeana and that’s the ending. Until the next book. Thank goodness I already have that laying on my TBR and I can’t wait to start that.

Sarah J. Maas has written another fantastic book when it comes to ‘Crown of midnight’. It starts off a little slow but the second part of the book is sooo fabulous that you kinda forget about that.