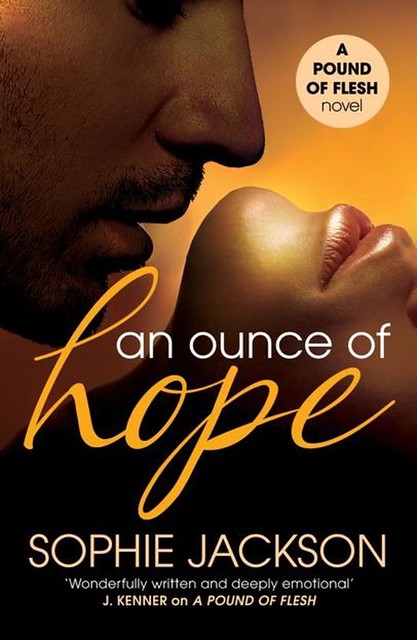 Max O’Hare: Tortured by memories of the woman he loved, the child he lost and the drugs that numbed his pain, Max is haunted by his past.

Grace Brooks: An eternal optimist, Grace appears to be the perfect girl, but she keeps the truth of her own difficult history closely guarded.

Fresh out of rehab, the last thing on Max’s mind is a relationship. Yet he’s drawn to Grace, sensing that she too is looking for escape. Bound by their greatest fears and deepest secrets, Max and Grace must learn to trust again. And the key to opening their hearts lies in one another…

‘An ounce of hope’ is sort of the second book in the ‘Pound of flesh‘ series. In ‘An ounce of hope’, Sophie Jackson tells Max’ story, his history and how he’s trying to pick up the pieces of the mess that is his life.

I really loved ‘A pound of flesh’, but ‘An ounce of hope’ wasn’t that fabulous. Max and Grace seem like they want each other and then not at all and that annoyed the crap out of me. Max is a stubborn asshole who wants to do whatever he wants, and he won’t believe anything his friends tell him. That gives him character, but sometimes I wanted to give him a kick up the ass.

What did make the book better where the steamy sex scenes. Yup, Sophie Jackson does that part very well. They’re steamy and sexy but not rude or pornographic. The style matches the new adult genre pretty well and I liked that. It makes reading ‘An ounce of hope’ a whole lot hotter!

‘An ounce of hope’ by Sophie Jackson is a great NA, in which you can lose yourself at times. But to fully understand the story you do have to read ‘A pound of flesh’ first.