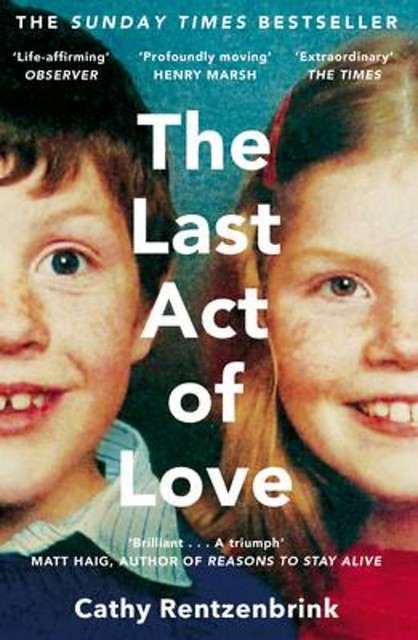 In the summer of 1990, Cathy’s brother Matty was knocked down by a car on the way home from a night out. It was two weeks before his GCSE results, which turned out to be the best in his school. Sitting by his unconscious body in hospital, holding his hand and watching his heartbeat on the monitors, Cathy and her parents willed him to survive. They did not know then that there are many and various fates worse than death. This is the story of what happened to Cathy and her brother, and the unimaginable decision that she and her parents had to make eight years after the night that changed everything. It’s a story for anyone who has ever watched someone suffer or lost someone they loved or lived through a painful time that left them forever changed. Told with boundless warmth and affection, The Last Act of Love by Cathy Rentzenbrink is a heartbreaking yet uplifting testament to a family’s survival and the price we pay for love.

‘The last act of love’ by Cathy Rentzenbrink is a very intense story about a girl whose brother gets into a coma after a car accident. The family has to deal with the care of the brother, but also with the judgements of the outside world and their own feelings. Cathy Rentzenbrink tells her own story, which makes it even more intense.

In ‘The last act of love’ you’ll read about the struggles the family goes through. In the beginning there’s hope that her brother will get out of the coma, but at some point that hope is totally gone. Cathy struggles with the fact he’s not the person he used to be and of course with the fact that they decide to end Matty’s life. That’s a decision not to be made lightly.

This book was so personal and intense to read, it also hit home. To read about how intense it is to go through such a thing, but also the struggles of a young girl and later an adult. Because you know it’s Cathy’s own story, it’s even more intense. I thought it was a book that felt heavy to read and it’s certainly not a book that everyone will like. Despite that I thought it was so nice to read how Matty’s family ends up being ok by talking about the whole situation.

‘The last act of love’ by Cathy Rentzenbrink is an intense and very personal book about her brother Matty who gets into a coma after a car accident. She shares her struggles and thoughts about the situation and that makes for an emotional book.