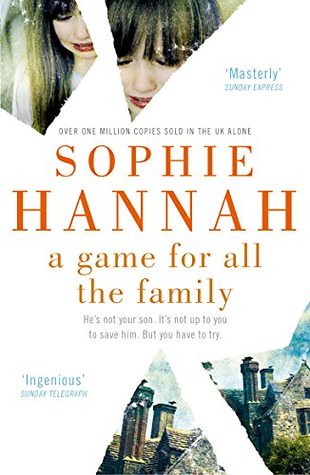 After escaping London and a career that nearly destroyed her, Justine plans to spend her days doing as little as possible in her beautiful home in Devon. But soon after the move, her daughter Ellen starts to withdraw when her new best friend, George, is unfairly expelled from school. Justine begs the head teacher to reconsider, only to be told that nobody’s been expelled – there is, and was, no George. Then the anonymous calls start: a stranger, making threats that suggest she and Justine share a traumatic past and a guilty secret – yet Justine doesn’t recognise her voice. When the caller starts to talk about three graves – two big and one small, to fit a child – Justine fears for her family’s safety. If the police can’t help, she’ll have to eliminate the danger herself, but first she must work out who she’s supposed to be…

You may know Sophie Hannah from her books in the style of Agatha Christie, and I read one of those books last year. I was quite curious to read one of her own books. ‘A game for all the family’ was a book I received from her Dutch publisher. Sophie Hannah’s writing style is easy to read, she shares enough of her main characters to get to know them, but not enough to reveal the whole story.

Despite it being in the ‘literary thriller’ genre, there was almost no sense of tension or a high level of excitement in the book. There is something there that makes you want to keep on reading. I wondered at times whether Justine was losing her mind or maybe it was all in her head. That wasn’t the case, but the story is too far-fetched for me. Next to that, Justine was mentally unstable, someone who didn’t care about others and just did what she wanted to do.

Even though I didn’t really like Justine, there was something in the book that kept me reading. Now I’ve finished it, I feel like ‘A game for all the family’ isn’t the best book I’ve ever read, but I ended up kinda liking it. And that’s something I admire from Sophie Hannah, she ended up convincing me!

‘A game for allt he family’ by Sophie Hannah is an intruiging novel, I wouldn’t call it a thriller. The story is too far-fetched, but somehow it entertained me.

A game for all the family by Sophie Hannah
Published by Hodder & Stoughton General Division
Genres: Thriller
Pages: 432
ISBN: 9781444776058