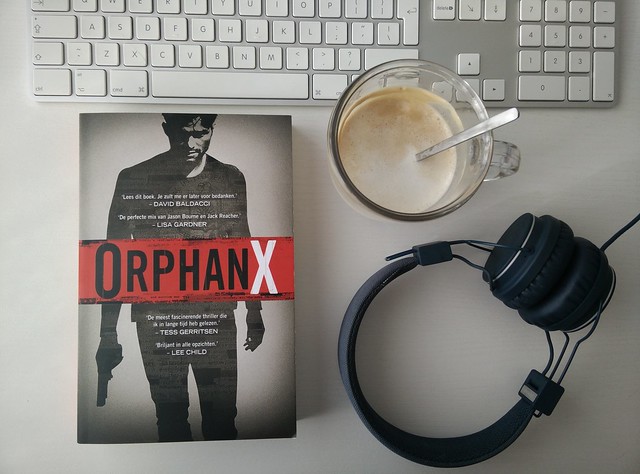 ‘Do you need my help?’ It was the first question he asked. They called him when they had nowhere else to turn. As a boy Evan Smoak was taken from an orphanage. Raised and trained in a top secret programme, he was sent to bad places to do things the government denied ever happened. Then he broke with the programme, using what he’d learned to vanish. Now he helps the desperate and deserving. But someone’s on his trail. Someone who knows his past and believes that the boy once known as Orphan X must die …

A couple of weeks ago I was invited for an evening at a Dutch publisher and Gregg Hurwitz was one of the guests. He told us about his new book, ‘Orphan X’. It took a while before I could start it, but I knew I was going to like it. On the arc (advance reader copy) we received there was a quote by Lisa Gardner saying it was a combination between Jack Reacher and Jason Bourne. That sounded promising.

You can easily see that Gregg Hurwitz is an experienced writer for movies. The action scenes in ‘Orphan X’ are almost made for a movie. I could totally picture the movie whilst reading and I cannot wait for that. Gregg Hurwitz is already writing the movie script and Bradley Cooper will be playing Evan Smoak.

Evan Smoak ain’t no hero, because he’s ruthless and trained to be a killer. Despite that there are some cracks in his tough pretence and that makes for a little bit of humanity in him. Gregg knows his main character inside and out and that shows. His whole history is thought out, while the plot is unexpected and came as a surprise to me.

The only downside? It ends with an open ending and we’ll have to wait till 2017 until the next book comes out.

If you love action thrillers like Jason Bourne, ‘Orphan X’ fits right up to that street. A book written to become a movie with insane action scenes and some humanity.

You can buy the book at the Book Depository, here.