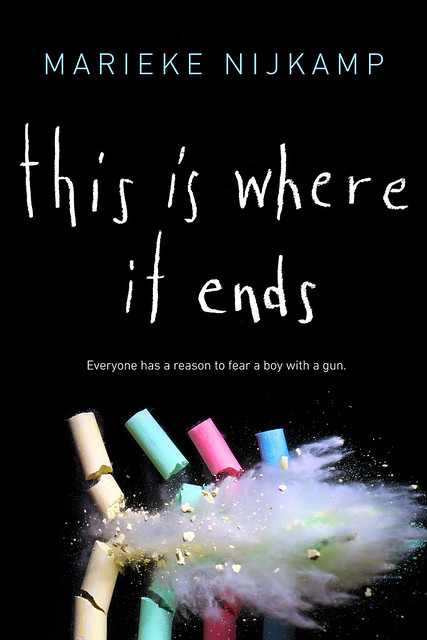 10:00 a.m. The principal of Opportunity, Alabama’s high school finishes her speech, welcoming the entire student body to a new semester and encouraging them to excel and achieve.10:02 a.m. The students get up to leave the auditorium for their next class. 10:03 The auditorium doors won’t open.10:05 Someone starts shooting.Told from four perspectives over the span of 54 harrowing minutes, terror reigns as one student’s calculated revenge turns into the ultimate game of survival.

Sometimes there are books that have been on your wishlist for ages, that you forget about or that you keep picking up at the bookstore and putting down again. ‘This is where it ends’ by the Dutch author Marieke Nijkamp was one of those books. But this is a special one. Marieke Nijkamp has written this book in English and it’s been on the New York Times bestsellerlist for weeks.

This week it was released in Holland, in Dutch and I received a copy, which made me very happy! It wasn’t long after I’d received it when I started it. The book is about 54 minutes in the lives of students at a school shooting. It’s been told in different perspectives how they live through these 54 minutes.

You know, from the beginning, that it’s going to be an emotional story and it is. But you cannot put it down. You have to know which of the students survive and if the shooter is caught. The more you get into ‘This is where it ends’, the more anxious you get and the more intense the story gets.

Marieke Nijkamp has told this story so damn well and so realistic that it feels you’re there. You cannot imagine how it feels to be at a school shooting, but Marieke Nijkamp helps you imagine it. I think that’s such a talent. I can’t say much else. This books deserves to be on every bestseller list because it’s a book everyone should read.

Marieke Nijkamp deserves the world. She lets you imagine how students during a schoolshooting feel. Despite the fact it’s a situation you almost cannot imagine, the story feels so real. ‘This is where it ends’ is intense and realistic book you should definitely read.