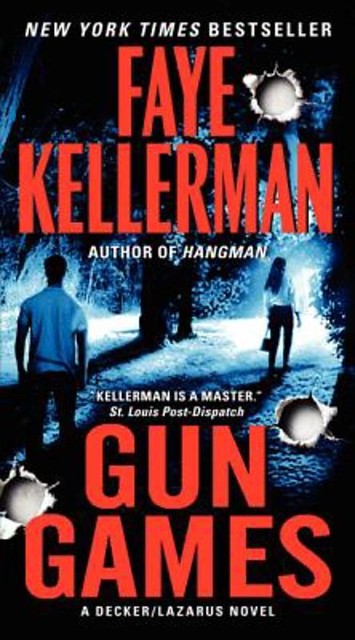 The Hesse suicide strikes a troubling chord in the household of Decker and his wife, Rina Lazarus, now that they’ve taken in Gabe Whitman the gifted and brilliant fifteen-year-old son of a killer whose own unexplained comings and goings only remind Decker that he knows almost nothing about the secretive boy living under his roof. But it’s a second teen suicide a young girl who attended the same exclusive prep school as Gregory Hesse that points Decker and his detectives down a dark alley of twisted allegiances and unholy alliances . . . and toward a cold-blooded group of high schoolers with a shocking predilection for guns and violence.

‘Gun Games’ by Faye Kellerman had been on my TBR for a while before I started reading it. I kinda forgot about it. Despite the heat and the fact that I wasn’t really in the mood to read, I felt like I’d finished this book so quickly. Two suicides that cause a little bit of suspicion makes you want to investigate the case more, just like Peter Decker does.

This is book twenty in the serie about Decker and Lazarus, but it’s no problem if you haven’t read the previous nineteen books. I didn’t really get the role of Rita Lazarus in the title, as she doesn’t really play a huge part in this book, apart from being a loving stay at home mum.

That was maybe the only downside to the book because despite there doesn’t happen a whole lot apart from the two suicides, it still entertained me. It’s not a thriller and not a novel, but I couldn’t put it down, especially the last couple of chapters.

I still had the feeling that ‘Gun Games’ could’ve done with a less pages, because some parts of the book felt too dragging (for lack of another word). I can’t put my finger on it, what I felt was wrong with the book, because in the end it was just a fine book.

‘Gun Games’ by Faye Kellerman isn’t a novel or a thriller, but something in between. The ending is gripping, but some bits felt somewhat dragging.