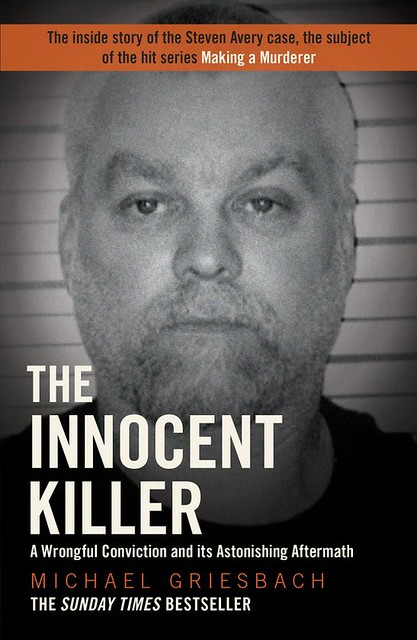 The story of one of America’s most notorious wrongful convictions, that of Steven Avery, a Wisconsin man who spent eighteen years in prison for a crime he did not commit and now the subject of the hit series Making a Murderer. But two years after he was exonerated of that crime and poised to reap millions in his wrongful conviction lawsuit, Steven Avery was arrested for the exceptionally brutal murder of Teresa Halbach, a freelance photographer who had gone missing several days earlier. The “Innocent Man” had turned into a cold blooded killer. Or had he?

Almost everyone has seen the documentary ‘Making a murderer’, about Steven Avery who has been in prison for 18 years and turned out to be innocent. I’ve watched the documentary with my mouth open, that’s how surprised I was. I received this book as a review copy and was quite curious to find out if it was filled with new things I didn’t know about.

That’s not really the case, although ‘The innocent killer’ is about the rape and how the police treated that case. Michael Griesbach writes about that case for about three quarters of the book, which is very interesting. Especially because he really is angry about how the police treated this case. And then the last quarter of the book is about the murder on Terese Halbach. It almost feels as if this part of the book is written by someone else. Michael Griesbach is convinced that Steven Avery has commited this murder and feels the evidence that Steven’s lawyers bring in, is ridiculous.

‘The innocent killer’ is a crazy book to read, but also very bizar. I was so into the part about the rape, because you read more than ever about the way the police handled this case. But the last part was even more bizar. Michael Griesbach has taken the side of the police and leaves parts of the murder case out.

I was so dissappointed in the ending of this book, while I enjoyed about three quarters of the book. Bizar how a book can totally turn around at the end.

‘The innocent killer’ by Michael Griesbach is definitely an interesting addition if you’ve seen ‘Making a murderer’, but it feels like the book has been written by two different people. The part about the rape case is interesting, but the part about the murder case is very different and I almost hated it. What a shame!

You can order the book at Book Depository, here.