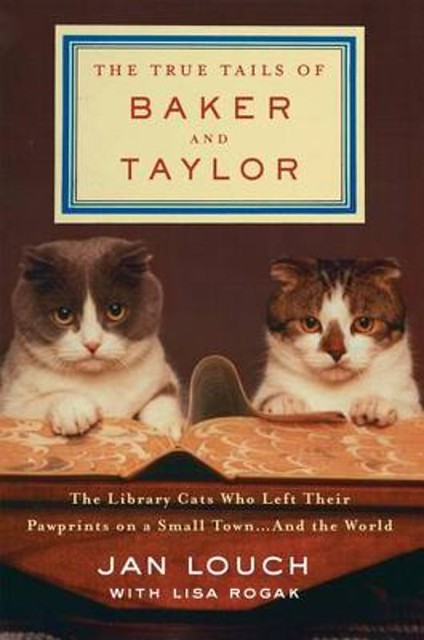 It all started with mice in the library.

Assistant librarian Jan Louch and a coworker decided that what the library needed was a cat. Or, even better, two cats. Soon, they found a pair of Scottish Folds who were perfect for the job. Jan named them Baker and Taylor, and they took up residence in the library.

But these cats were much more than mousers. Visitors to the library fell in love with Baker and Taylor and their antics just as Jan had. And then, after Jan let the cats be photographed for a poster, they became feline celebrities. Children from across the country wrote them letters, fans traveled from far and wide to meet them, and they became the most famous library cats in the world.

I love books and cat, so when I found out that there was a book about cats in a library, I really wanted to read it. I would love to work in a library which has cats, although I’m not sure if that’s possible here in the Netherlands!

Jan Louch took in two cats at work, the library and they became world famous, maybe even the predecessors of grumpy cat. To read about Baker and Taylor as someone who has a cat too, it’s so recognisable. There were a lot of times that I had to keep from laughing out loud (especially the part where one of the cats is stuck in the handle of a grocery bag and runs around the whole library to get rid of the bag was one of the funniest parts!), but the end was kind of sad too.

Throughout the book, Jan Louch shares not only stories about the cats, but also (although sometimes sounding a bit teaching) about the developments in the library world. The struggles they had when they again had less and less money to spend, but also when there was another new system everyone had to get used to. There were also highlights, especially when a teacher set up a Baker & Taylor fanclub or when the library got busier when Baker & Taylor got more and more famous.

Other than stories about cats, Jan Louch writes about her personal life, which makes the book feel a bit more alive. It’s not only about the famous cats, but also about the woman who was taken care of them almost their whole life.

‘The true tails of Baker & Taylor’ by Jan Louch is a fun, recognisable and touching book that everyone who loves the library (and cats!) will love.

You can order the book from the Book Depository here.