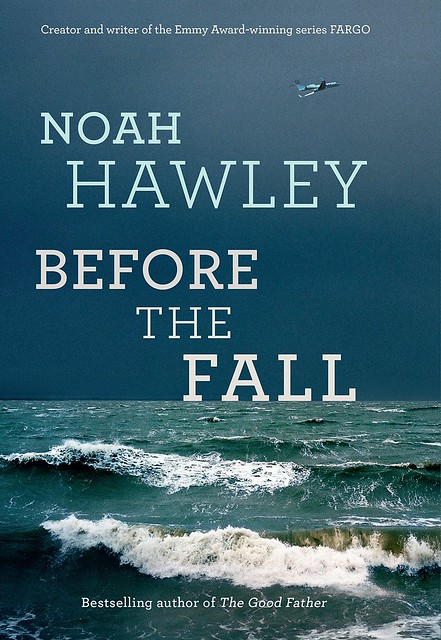 The rich are different. But fate is blind. Down-on-his-luck artist Scott Burroughs would usually take the ferry back to New York from Martha’s Vineyard, but he is unexpectedly offered a spare seat on the Bateman family’s private jet. Then just minutes after take-off, the plane crashes into the ocean and of the eight passengers and three crew, only Scott and the Batemans’ small son, JJ, are left alive. The extraordinary nature of their survival, combined with the fact that David Bateman was CEO of a populist TV news channel, means that Scott will not be returning to anonymity. Along with the orphaned boy, he is engulfed by a maelstrom of speculation, which soon overtakes the official investigation into the tragedy. Who else was on the plane? Was there a bomb, a missile? Who is Scott Burroughs?

When I read that Noah Hawley wrote the scripts for the tv-show Fargo, I really wanted to read this book. I’m a huge Fargo fan and you can really notice that Noah Hawley writes for tv. The book is filled with very detailed scenes and everything is so well described that you can picture everything easily. Noah Hawley has a very typical way of writing, which I absolutely loved.

Other than the way of writing that I loved, ‘Before the fall’ is really well put together. The story starts as a novel and you’re touch by the bond the artist and the boy have together. It ends as a thriller, with flashbacks to slowly reveal what happened before the plane crash.

When I started reading it, I thought it was so beautiful and then the ending surprised me so much which made the book even better. I already couldn’t put it down, just because of the way it was written, but the thriller part of the book made me finish the book even faster.

Noah Hawley is an experienced writer and you can feel that throughout the book. He has a way with words that make you fall completely in love with the story. ‘Before the fall’ starts as a novel and ends as a thriller and you get totally sucked into the story. What an amazing book!

You can buy the book at the Book Depository here.