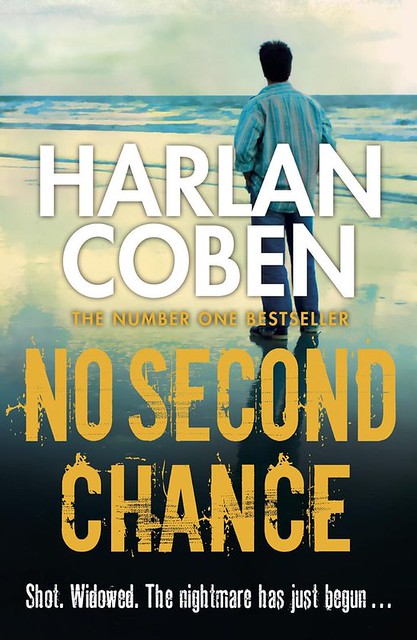 Marc Seidman’s idyllic world is brutally ripped apart when he is gunned down in his home. Twelve days later he wakes up in hospital to learn that his wife is dead and his baby daughter Tara is missing. A ransom demand is made and agreed to. But something goes terribly wrong. The kidnappers escape, and Marc remembers the ransom note’s ominous warning: there will be no second chance.

An agonising eighteen months pass with no word. And then, as Marc has just about given up all hope of seeing his daughter again, a package arrives with a note attached: want a second chance?

The note is chilling, but Marc sees only one thing: the chance to save his daughter. And, haunted by deception and deadly secrets – about his wife, about an old love, and about his own past – he vows to bring Tara home … at any cost.

I’m slowly but surely collecting all the Harlan Coben books. I often buy them at the thriftshop or when there’s a sale going on at the bookstore. I bought ‘No second chance’ at the thriftshop, this was one of those amazing finds, a completely new book hidden in a corner, destined for me to buy it.

Harlan Coben writes thrillers and he always manages to make me obsessed with his books. ‘No second chance’ was one of those books. Marc Seidman doesn’t know what’s happened to his daughter and tries, without contacting the police, to get his daughter back. When you read the book, you feel how desperate he is and how he’s willing to do anything to get her back.

That is, until he finds out that the thruth, or at least what he thought was the truth, turns out to be something completely different. It lasts until the last pages of the book before you know the real thruth and until then, Harlan Coben and the book holds you in its grasp.

You desperately want to know what happened to Marc’s daughter and if he’s able to get her back from her kidnappers. If that happens, well you have to read ‘No second chance’ yourself to find out. I thought the ending was really surprising, something happened that I did not see coming at all, even as an experienced thriller reader. I love Harlan Coben’s books and I cannot wait to start the next one on my reading pile.

Harlan Coben does it again. You’ll be on the edge of your seat whilst reading ‘No second chance’ and you’ll be surprised once you’re at the end. What a great thriller, I love it.