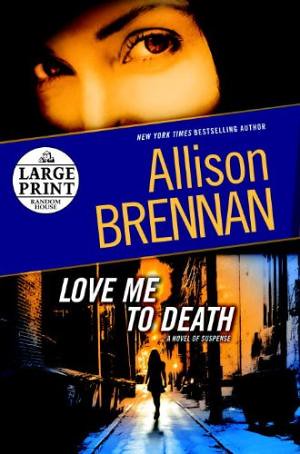 With her future and possibly even her freedom suddenly in jeopardy, Lucy discovers she’s a pawn in someone’s twisted plot to meet our vigilante justice. She joins forces with security expert and daredevil Sean Rogan, and together they track their elusive quarry from anonymous online chat rooms onto the mean streets of Washington, D.C. But someone else is shadowing them: A merciless stalker has his savage eye on Lucy. The only way for her to escape his brutality may be another fight to the death.

‘Love me to death’ by Allison Brennan is a thriller with an intriguing summary. The suspense in the book is not very present, although there are moments in the book you can’t put it down because it’s so intriguing.

Despite the suspense not being very present, the book held my attention from beginning till the end. It touched me because Lucy is so strong, it’s almost insane. ‘Love me to death’ also touched me because I admired the way Lucy handled most situations. I wouldn’t know if I could act the way she did.

The story was entertaining and the ending was quite gripping, but still, the story could’ve done with a bit more suspense. ‘Love me to death’ has been build up great, it’s admirable and the fact that there’s a lot of romance in it, is a plus for me.

‘Love me to death’ by Allison Brennan is a fantastic thriller with an admirable main character. Combine that with a gripping story and lot of romance and you get a perfect recipe for a great book.