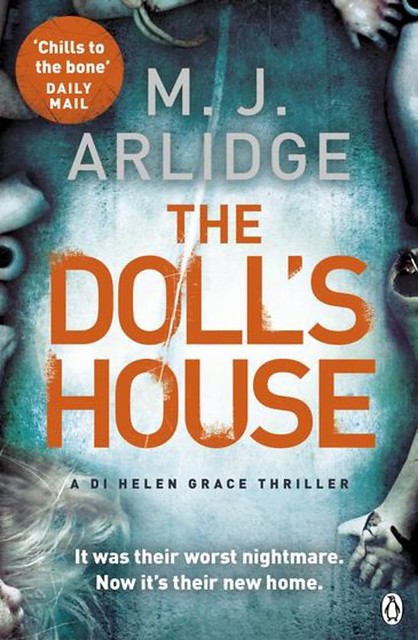 A young woman wakes up in a cold, dark cellar, with no idea how she got there or who her kidnapper is. So begins her terrible nightmare. Nearby, the body of another young woman is discovered buried on a remote beach. But the dead girl was never reported missing – her estranged family having received regular texts from her over the years. Someone has been keeping her alive from beyond the grave. For Detective Inspector Helen Grace it’s chilling evidence that she’s searching for a monster who is not just twisted but also clever and resourceful – a predator who’s killed before. And as Helen struggles to understand the killer’s motivation, she begins to realize that she’s in a desperate race against time…

After reading ‘Eeny meeny‘ and ‘Pop goes the weasel‘ I couldn’t wait to start ‘The doll’s house’ by M.J. Arlidge. Despite it being another gripping thriller, I thought this was the least exciting one of the three I’ve read so far. Of course you know Helen will solve the case, which makes it less gripping.

But what I really admire from M.J. Arlidge is that he continues to add new characters in the story. Those characters you’ve read about in the previous books, but they take on a bigger role in this books, as you already know Helen and Charlie quite well. This makes it a refreshing and more interesting story. Next to that he has a way of writing, short chapters and different points of view, which is the recipe for a thriller that is fast paced.

Maybe I’m biased after doing an interview with M.J. Arlidge, but I hope and really believe that he’ll become a huge succes in the thriller world, especially since he’s writing so quick and released books every six months. I’m already looking forward to reading the next books.