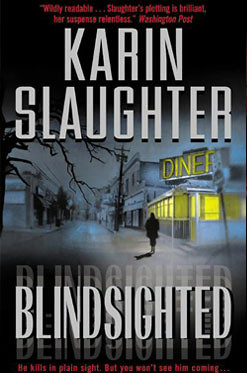 The sleepy town of Heartsdale, Georgia, is jolted into panic when Sara Linton, paediatrician and medical examiner, finds Sibyl Adams dead in the local diner. As well as being viciously raped, Sibyl has been cut: two deep knife wounds form a lethal cross over her stomach. But it’s only once Sara starts to perform the post-mortem that the full extent of the killer’s brutality becomes clear. Police chief Jeffrey Tolliver – Sara’s ex-husband – is in charge of the investigation, and when a second victim is found, crucified, only a few days later, both Jeffrey and Sara have to face the fact that Sibyl’s murder wasn’t a one-off attack. What they’re dealing with is a seasoned sexual predator. A violent serial killer…

I love Karin Slaughter so when I saw this book at the thriftshop I immediately bought it. I’m slowly trying to collect all her books because she really is one of my favorite authors. Karin Slaughter does have a typical way of writing, which is often very graphic. You either love it or hate it.

‘Blindsighted’ is the first book in the Grant County series and that’s noticable. If you’ve read more of her books, you can definitely see the progress Karin Slaughter has gone through. But, ‘Blindsighted’ is an amazing thriller (which turned out to be a book I’ve already read), in which you’ll get to know all the main characters in the series. You can read the books seperately, but it is kinda nice to read them chronologically.

‘Blindsighted’ is the first book in the Grant County series by Karin Slaughter. A fantastic, although somewhat graphic thriller by the queen of suspension. A mustread, if you haven’t read it yet.