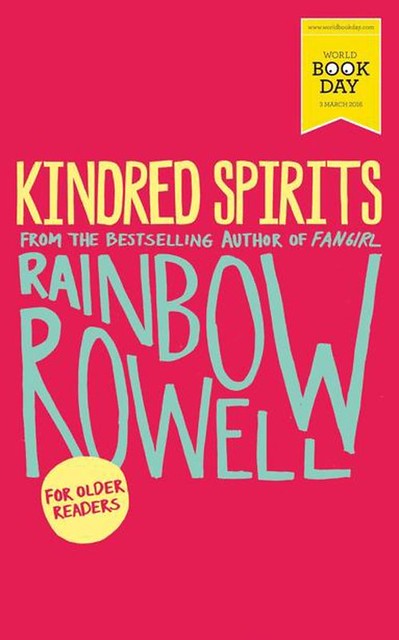 ‘Everybody likes everything these days. The whole world is a nerd.’ ‘Are you mad because other people like Star Wars? Are you mad because people like me like Star Wars?’ ‘Maybe.’ If you broke Elena’s heart, Star Wars would spill out. So when she decides to queue outside her local cinema to see the new movie, she’s expecting a celebration with crowds of people who love Han, Luke and Leia just as much as she does. What she’s not expecting is to be last in a line of only three people; to have to pee into a collectible Star Wars soda cup behind a dumpster or to meet that unlikely someone who just might truly understand the way she feels.

The writing style of ‘Kindred Spirits’ and the subject are both great and because it’s written by Rainbow Rowell, it’s easy to read. The story is well put together and despite it being so short, you still get to bond with the main characters and that’s what I really liked about this book.

At times the story was very relatable, because if you’ve got no idea what a fandom means, it can look and sound quite weird, but once you’re part of a fandom, it’s as normal as eating and breathing. That’s what happened to me and the Twilight fandom and I still keep in touch with the people I met through the Twilight books. That’s really something special.

‘Kindred spirits’ really is a great story to read between books and it will certainly bring a smile on your face.