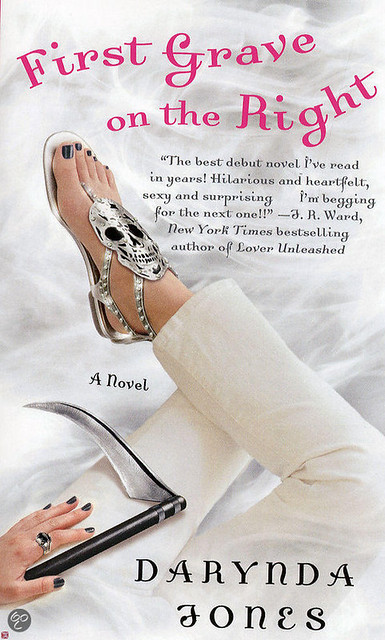 Charley, a Grim Reaper, sees dead people. And it’s her job to convince them to “go into the light.” But when these very dead people have died under less than ideal circumstances (i.e. murder), sometimes they want Charley to bring the bad guys to justice.

Charley Davidson (yes, for real!) is a special lady. She’s a private detective, but that’s basically a cover-up as she’s the Grim Reaper. She guids dead people to the afterlife. That doesn’t always work out, because there are plenty of dead people who want revenge before they pass on. Charley helps the Albuquerque police solving crimes, because she can talk to the dead, but it’s not always appreciated. When she has all these sexy dreams about a man and she finally finds out who he is, she starts an investigation, that gives her answers she may not have wanted.

The cover of the book mentions that if you’re a Twilight-fan, you’ll love this book. That sets the bar high (well, not really). ‘First grave on the right’ is a grown up version of Twilight. Nope, there aren’t any shiny vampires in it, but there is lots of humor and plenty of sexy scenes. Add speaking to the death and a whole lot of trouble and you’ll have a Supernatural episode with a kickass woman playing the main character.

I also bought the second book in this series, ‘Second grave on the left’, and when I did a bit of research, I found out that part ten (!!) of this series will be out next year. I’ve got plenty of reading to do before that. ‘First grave on the right’ doesn’t really have an open ending, but there are still a lot of unanswered questions which makes you curious for the next book. At times, I felt the story went from one end to the next, but it didn’t stop me from reading quickly. The characters still need to be developed, but since it’s a series, that didn’t bother me too much.

‘First grave on the right’ is filled with humor. Add to that a kick ass woman and a lot of spirits and you’ve got yourself a story that can go anywhere. It reminded me of Stephanie Plum, a book series I’m a huge fan of. If you’re a fan of the Urban Fantasy genre and you want books to have a decent amount of humor? This is your story.