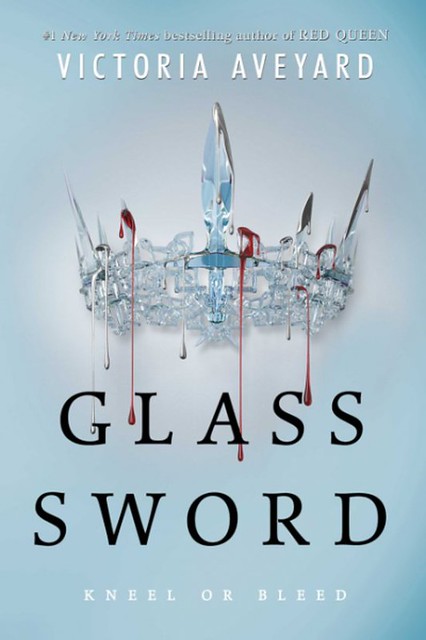 Mare Barrow’s blood is red—the color of common folk—but her Silver ability, the power to control lightning, has turned her into a weapon that the royal court tries to control. The crown calls her an impossibility, a fake, but as she makes her escape from Maven, the prince—the friend—who betrayed her, Mare uncovers something startling: She is not the only one of her kind.

Pursued by Maven, now a vindictive king, Mare sets out to find and recruit other Red-and-Silver fighters to join in the struggle against her oppressors. But Mare finds herself on a deadly path, at risk of becoming exactly the kind of monster she is trying to defeat. Will she shatter under the weight of the lives that are the cost of rebellion? Or have treachery and betrayal hardened her forever?

I wanted to read ‘Red Queen’ just because I really loved the cover. I had no idea what it was about, but once I started, I was sold. I fell in love with the story and with mare. I really looked forward to ‘Glass sword’. But man oh man, I was dissappointed.

The book felt like quicksand. Mare has to fight and fight and fight and everything goes wrong. Just when you think something’s finally going right, nope, it turns out you were wrong. The story goes on and on with a lot of violence. I really wanted to cry whilst reading this, because I loved ‘Red Queen’ and I hated ‘Glass Sword’. I felt like I had read the same story that Tris (Divergent) and Katniss (The Hunger Games) told, but a dozen times more annoying. So not original.

I was so dissappointed and to be honest, I’m not sure if I wanna read the next book in this series. I thought Mare was annoying and at the end of the book I wanted to smack her in the face. She’s so standoff-ish, I missed the personality in her character.

I felt mostly dissappointment whilst reading ‘Glass Sword’. I’ve thrown the book aside many times, but still kept on reading. About three quarters in I thought the story was finally getting interesting, and the ending was okayish, but gees.