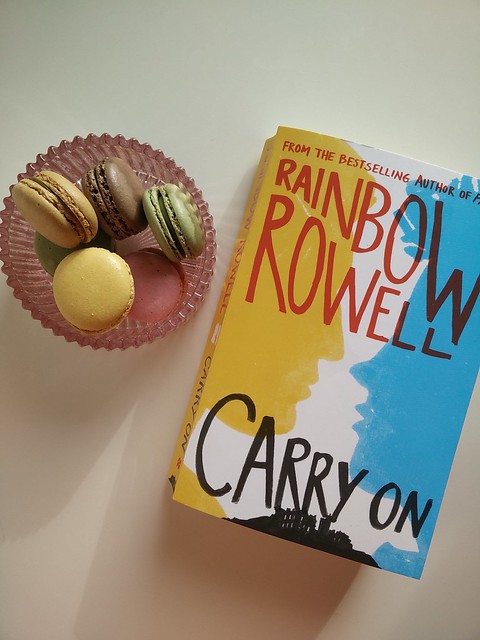 Simon Snow just wants to relax and savour his last year at the Watford School of Magicks, but no one will let him. His girlfriend broke up with him, his best friend is a pest and his mentor keeps trying to hide him away in the mountains where maybe he’ll be safe. Simon. can’t even enjoy the fact that his room-mate and longtime nemesis is missing, because he can’t stop worrying about the evil git. Plus there are ghosts. And vampires. And actual evil things trying to shut Simon down. When you’re the most powerful magician the world has ever known, you never get to relax and savour anything.

‘Carry on’ by Rainbow Rowell is based on the fanfiction that’s been used in the book ‘Fangirl’. I really loved Fangirl and when I saw ‘Carry on’ was coming out, I was really excited and hoped the book was good.

And I hate to dissappoint you, I didn’t like it. Ok, I kinda liked it, because it reminded me of ‘Fangirl’ and the emotions that I felt whilst reading that book. But storywise, it held little to no interest to me. The story felt dragging, it could’ve done with a chapter or two (or more) less, in my opinion.

The romance between Simon and Baz was cute and I totally forgot about it, so that was a nice surprise, but Simon was annoying me most times. He was very selfish and I felt that he cared for no one but himself. He wasn’t the brave person he’s based on (Harry Potter) and that annoyed me.

Rainbow Rowell is a great writer and I really hope I’ll love ‘Eleanor and Park’ as that’s on my reading pile too.

If you loved ‘Fangirl’, you’ll want to read ‘Carry on’, but I hope you won’t be as dissappointed as me. The story was a bit dragging and Simon is a kinda selfish but I did kinda like it.