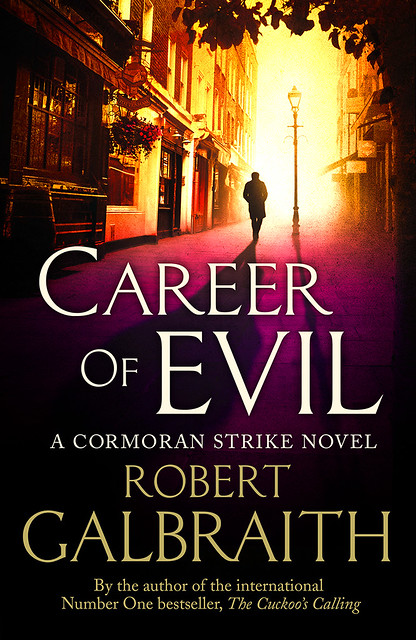 When a mysterious package is delivered to Robin Ellacott, she is horrified to discover that it contains a woman’s severed leg. Her boss, private detective Cormoran Strike, is less surprised but no less alarmed. There are four people from his past who he thinks could be responsible – and Strike knows that any one of them is capable of sustained and unspeakable brutality. With the police focusing on the one suspect Strike is increasingly sure is not the perpetrator, he and Robin take matters into their own hands, and delve into the dark and twisted worlds of the other three men. But as more horrendous acts occur, time is running out for the two of them…

I’m a huge Harry Potter fan and when I read ‘The Casual Vacancy’ I was a little bit dissappointed. I didn’t really like it and was scared that J.K. Rowling was only as good as the Harry Potter books.

Thank goodness she started writing the Cormoran Strike books and I fell in love with them. I finished ‘Career of evil’ in just a matter of days. It starts with the leg that’s been delivered to Robin, Cormoran’s assistant. From that moment on, you’ll read the story from two points of view, one from Robin and Cormoran and one from the killer. That makes the story interesting and also keeps you wanting to read on.

As the story unfolds, you’ll get to know the killer a bit, but you still haven’t figured out who he (or she) is. And that’s the whole exciting element in the book. J.K. Rowling has such a talent for writing such stories and has been amazing in writing the Cormoran Strike books and those are the only (well, not only) books where the release date is marked on my calendar.

And J.K. Rowling never dissappoints. ‘Career of evil’ is a book that I couldn’t put down until I’d finished it. The suspense is felt throughout the book and the ending. OMG. I cannot wait for the next book, which probably isn’t out until next year (or the year after that).

If you’re looking for a detective series, you must read all of the Cormoran Strike books (you can’t start with this one as you’ll miss some of the details). They’re intense, exciting and well put together.